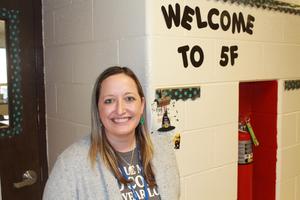 Lisa Janes comes from a family steeped in military service. Her grandfather, two uncles and a step-brother all served this nation proudly. So shortly after 9/11, Lisa, who is a special education teacher at Glen Oaks School in Hickory Hills, decided to follow in her family’s footsteps.

After graduating high school, she enlisted in the United States Coast Guard and attended boot camp in Cape May, New Jersey.  After completing boot camp she was stationed in New York City where she patrolled and protected New York Harbor. Mrs. Janes, who was on the varsity swim team in high school in the Quad Cities, was part of a crew that participated in numerous search and rescue missions. She said she was also responsible for maintaining radio-watch and responding to vessels that were in distress.

When she wasn’t assigned to radio-watch, Mrs. Janes was part of a crew that patrolled New York Harbor or was assigned to perform general engine maintenance on the boats at the station.  She was also chosen to speak about the Coast Guard at a nearby elementary school and was selected with three other individuals to serve as a 'sideboy' (individuals who salute visitors of high rank or importance) for Hillary Clinton when she visited the Coast Guard station.

“We would also escort cruise ships in and out of New York Harbor,” she said.

She said while in New Hampshire she was part of a maintenance crew for three cutters (two 270-foot cutters and one 210-foot cutter). In addition to performing general maintenance on the ships, she was able to join in northern patrols where they would be out to sea for two months.

She earned her Bachelor’s Degree at Plymouth State University in Plymouth, New Hampshire and her Masters' Degree at University of St. Francis in Joliet.

Mrs. Janes and her husband Michael live in Lemont with their three dogs.